This wonderful chainsaw art comes to the 3rd Annual Downtown Sculpture Trail with the delightful addition of "Fiddle Frog!" From the second he arrived on the lawn of Hocutt-Ellington Memorial Library he's attracted tons of admirers and posed for countless photos.

"Fiddle Frog," weighing in at 350 pounds, is fiddling a tune while standing guard for readers and library patrons at the corner of Church and Main Streets. This captivating wooden sculpture, dressed in an elegant tuxedo jacket, is carved from one huge yellow pine log and stands 6.5 feet tall and 3 feet wide.

A masterful chainsaw artist, Corey Lancaster is the onsite artist at Boon Hill Gallery near Princeton, NC. Together with his grandfather, Lancaster owns the gallery that showcases his revered work as well as the large and diverse inventory of chainsaw carvings created by various artists from across the U.S.

Lancaster set out to hike the 2,180-mile Appalachian Trail in 2012 to find himself after spending 4 years pouring 70 hours a week into his job managing a restaurant. While hiking the trail, he had a realization that he was spending his time doing something that he liked, but not something he wanted to do forever. After spending 6 months, often alone with his thoughts and some words of wisdom from his grandfather, he carved out a new dream - and this one runs on gasoline! When Lancaster returned from his trip, his grandfather handed him his first chainsaw and within a few short months his skills had exponentially increased. 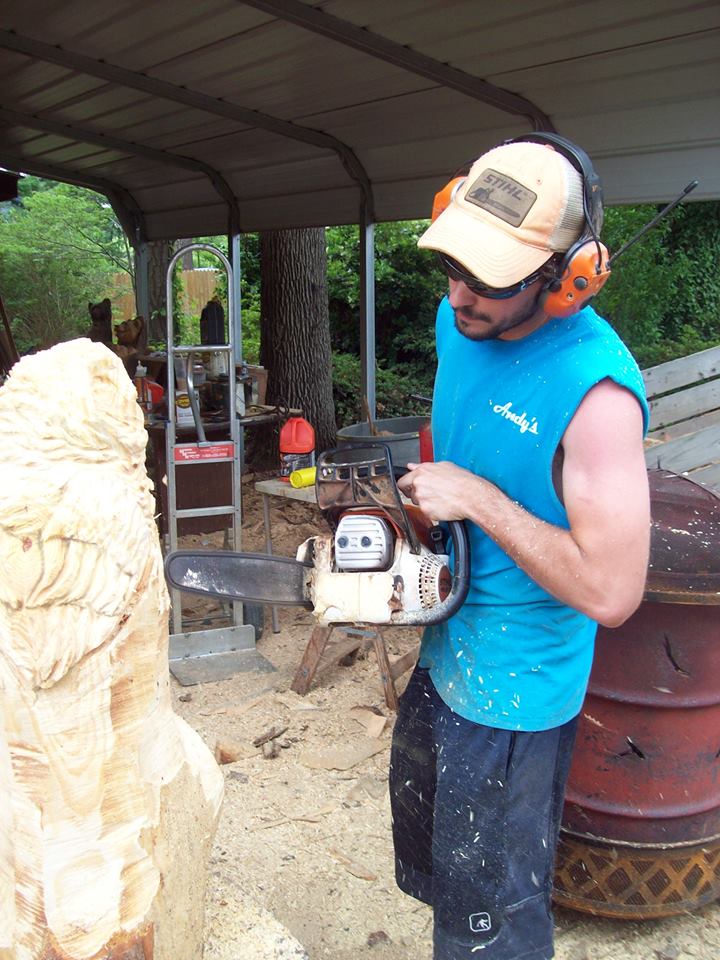 "I picked it up pretty fast. They say there are natural carvers who see things in the wood, they can take a piece of cardboard and turn it into a sculpture," Lancaster said.

Although he doesn't say he is a natural carver, watching him in action with his chainsaw removes all doubt. He regularly competes in carving competitions where he further hones his skills.

"Some chainsaw artists believe in only using a chainsaw, but I'm a perfectionist," he said. "I'm over-critical on my pieces. A lot of guys will just settle for how it is, but I can't. I'll send pictures of my carvings to other carvers and ask what I could have done better."

Don't fear the frog - this one's humorous and waiting to delight children and adults alike!